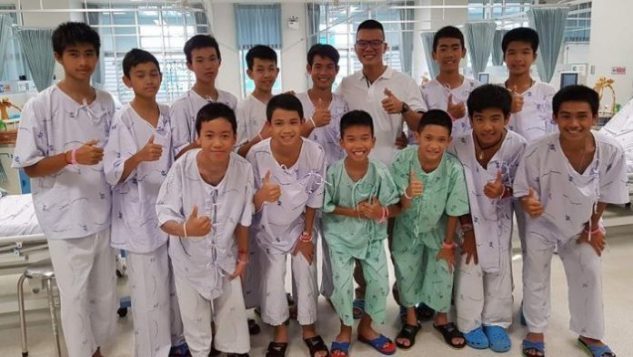 First, your child is out playing with friends. Next, you’re standing helpless, waiting, praying and watching as rescue teams, monsoon rain and a flooded cavern stand between you and your child’s safety.

Earlier this summer, the world was captivated by the race to rescue the Wild Boars, the Thai boy’s youth soccer team that had become stranded in a flooded cave. While exploring the cave after a soccer match, monsoon rains around them intensified and caused the entryway to blocked by rising water levels, trapping the 12 players and their coach without access to food or fresh water for two weeks. After a search team discovered them in the cave, it took rescuers an additional three days to extract the players and their coach from the flooded cave, with one volunteer diver dying during the dangerous and complex rescue operation.

Despite the players being examined and treated at the hospital after their rescue–and some even spending time at a buddhist temple and being ordained as novices–some experts believe the trauma that they experienced in the cave may still have left a tough road ahead as these kids continue to recover, as the kids might suffer extreme emotional distress after their two-week ordeal, including anxiety, depression, phobias and post-traumatic stress disorder (PTSD).

Dr. Jon LaPook, chief medical correspondent for CBS News, told “CBS This Morning” that he’s worried about their mental state further down the road as the leave the spotlight. According to LaPook, anything from darkness, swimming or just feeling cold could trigger memories of their time in the cave or the rescue, and that they could feel an overwhelming sense of guilt over the death of the volunteer diver.

Other experts, including Singapore psychiatrist Dr. Lim Boon Leng, believe the kids will need psychological evaluations after the first month back home, and should have regular mental health checkups.

“With something like this, which is pretty traumatic,” said Lim to The Daily Beast, “what we really worry about in the first month, they may be jittery and nervous. If it goes beyond one month then they could have post-traumatic stress disorder…when they start to feel the world is a bad place.”

While monitoring for PTSD and other mental health issues over a period of time is certainly warranted, getting back to each person’s normal routine and reconnecting with family and friends is the most important aspect of their recovery process.

“It’s what will sustain them down the road when all the media has subsided and life returns to dealing with day-to-day issues,” said Dr. Benjamin Keyes, Director for Center for Trauma and Resiliency Studies at Divine Mercy University. “Many will not have any long lasting effects from the experience while a few may have severe issues in the future.”

According to Dr. Keyes, research has shown that the determining factor seems to be whether or not the individual had a healthy or unhealthy attachment to their caregivers early in life. The initial orientation to the world happens as infants in the developmental stage of Trust vs. Mistrust, where we encode into our thinking and responses safety or not based on nurture and early attachment.

In the wake of a events like what these kids went through, returning to a normal life while assessing and treating the victims’ mental health is just as critical as treating their physical health. How can you help others who face mental health challenges after traumatic experiences? Learn more about the Center for Trauma and Resiliency Studies and the psychology and counseling programs offered at Divine Mercy University.